Comics are full of magic science. You might think science is depicted more realistically now than it was in the golden age, but really it's just better disguised. Sometimes.

"But what do you mean by magic science, Mari?" I hear you say. I'm glad you asked. Magic Science is where something impossible happens but a wholely unconvincing scientific explanation is given for it. Wonder Woman is a good example. Yes, you know I was going to relate this to Wonder Woman before long, didn't you. I just happen to be reading a lot of Wonder Woman lately so it's a good source of examples for what I am thinking about, not to mention the reason I was thinking about it in many cases. Don't worry, I'll find something else to fixate on before long. Anyhow, as I was saying...

Wonder Woman is full of examples; the mystical purple ray that cures everything from disease and physical trauma to recent death. It also does a nice sideline in removal of unsightly scars (and you wondered why WW and all the other amazons look so good). The magical invisible plane that could fly to other planets even in the days when it was propeller driven, never breaks down or runs out of fuel, and has an A.I. so sophisticated you wonder why it doesn't get to talk sarcastically or change into a giant robot. And then there's WW's clothes that 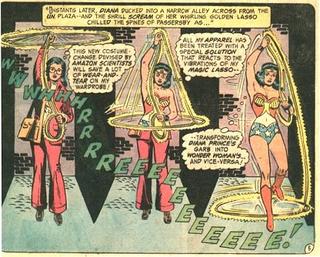 have been "scientifically treated by amazon scientists" so that all she needs to do is twirl her magic lasso and her ordinary clothes are replaced with her fighting costume.

Come on, guys. That's not science, it's magic and you know it. Unless you are going to explain where her clothes go to and what the whole lasso twirling business is about then don't embarass yourselves with this pathetic non-explanation. She's a character with a magical background, so why not just say it's magic and leave it at that? At least Marvel have that whole "unstable molecules" thing going for them. We all know it's BS but it sounds so much more convincing.
Posted by Marionette at 1:52 pm

Interesting, and worthwhile point. Especially considering just how many magical types are running around the DC universe. I've not read enough WW to really get a feel for how she does it (do they still use the rope/costume trick?), but you're certainly onto something.

They certainly don't force Mary Marvel into convoluted explanations of how she gets her costume.

No, they phased out the magic rope trick when she was revamped in 1986, along with many of the dumber baggage associated with the character.

I never did really understand why they introduced it. None of the other superheroes of the period bothered with a transformation scene and it doesn't add anything to the story.