Who's that Girl? Part 4a: Not exactly her Finest hour 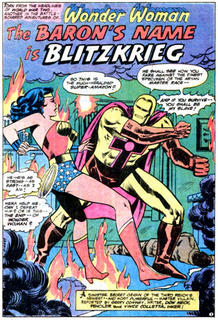 With the appearance of the TV show DC made the obvious move of giving Wonder Woman a second comic. Well, sort of. They gave her a back up spot in World's Finest, backing up the traditional Superman/Batman teamups along with Green Arrow, Black Canary, and Vigilante (later replaced by The Creeper) which was at that point running to 80 pages and bimonthly.

The Wonder Woman stories featured here are written by Gerry Conway (regular writer on WW by this point) and are uniformly awful. WW gets to fight horribly disfigured mad nazi spies(1) dressed in an even more ludicrous costumes than the ones in the main comic,only this time mostly set in London between April and August 1942(2).

Conway does make an effort to tie in some golden age continuity here, as he does in the main series. In this case it means bringing back villain Doctor Psycho for an inevitable WW team up adventure with Sgt. Rock.(3) Though throwing in some aliens from a 15 year old issue of Mystery in Space (4), duped into working for the nazis by Dr Psycho is probably overdoing it for a single story, even a two-parter.

And after the big anniversary crossover with the other World's Finest feature characters, Superman, Batman, Green Arrow, and Black Canary, which once again Wonder Woman is doomed to forget(5), the stories revert to present day Earth 1 adventures. Presumably they must have assumed anyone reading World's Finest was also reading Wonder Woman as there is no explanation given here for the change of scene.

Next: As I was saying before I was rudely interrupted by World War 2...

Notes
1. No wonder the nazis lost the war if their idea of inconspicuous was someone who was grotesquely disfigured and wore a bright yellow nazi uniform. And what kind of strategy is german high command using to pick their lead field agents that results in deformed freaks with horrible dress sense, anyway? Couldn't they find anyone more normal looking who was qualified to do the job?

3. The funny thing is that long time WW writer Robert Kanigher was also the main writer on Sgt. Rock, but never got the opportunity to get them together himself.

4. Actually the aliens referenced in Mystery in Space #73 are never seen there and have in fact died out a million years previously, and their only notable characteristic (their legacy of a superweapon) does not feature in the WF story, so I am at a loss to understand why they are linked to this story or even mentioned at all.

Anonymous said...
This comment has been removed by a blog administrator.
1:23 am

Anonymous said...
This comment has been removed by a blog administrator.
1:26 am

I just browsing through some blogs to get some ideas for mine, I hope you don't mind. I would like your opinion because you have a great blog here!

I wish to start writing about long island web design What do you think?

Come and check out my site let me know if you think my topic would spark an interest.

Anonymous said...
This comment has been removed by a blog administrator.
2:00 am

I think I'd be more convinced by your pathetic trolling for attention if I hadn't just deleted 3 other posts that were doing the same thing.

Anonymous said...
This comment has been removed by a blog administrator.
2:16 am

Anonymous said...
This comment has been removed by a blog administrator.
2:39 am

Anonymous said...
This comment has been removed by a blog administrator.
2:58 am

I came to your blog from the Holliday College group, following your Moon Girl mention. Your comments are very interesting, but I also think your Schrodinger's Cat Toy is an *inspired* idea. I'm just sorry I don't have the superhero-style boffin brain to invent one.