Who's that Girl? Part 2: What Diana did next

Wonder Woman #204 is an odd comic. Robert Kanigher, longtime WW writer and editor had been noticeably absent since the issue before the modern revamp, and his sudden return is quick to dump everything associated with the previous five years of continuity. Unlike the "feminist" era, which although it put the character through such radical changes that it bent your suspension of disbelief into a knot at no point rewrote what had occured previously, this latest change of direction did retcon several elements; some from WW's origin, and some from the era it finishes. It is also full of Kanigher's "don't think too much about this or it won't make sense" hallmark writing.

The death of I Ching and the return to Paradise Island I dealt with in the previous part. The major new elements introduced here are the introduction of Nubia and Diana's new secret identity. Nubia, we are told over the next couple of issues, is in fact Diana's sister. In a revision of WW's origin we are now expected to believe that Aphrodite commanded Hippolyte to sculpt two children from clay, instead of one, and the second infant is black. This and having Diana set up an apartment with a black girl and an oriental suggest that there is some kind of multicultural awareness intention here, but it doesn't really get very far.[1]

Why Aphrodite feels the need to introduce a black girl into the exclusively white skinned amazon society is never addressed, and no one, including the goddess, seems to bother a great deal about her kidnapping. Neither is it clear why Hippolyte feels it necessary to conceal this knowledge from Diana for several issues, other than to add an air of mystery to the plot which it doesn't really rate. But then when Nubia shows up on Paradise Island claiming that she deserves the title of Wonder Woman, there is no real explanation of what it is she is laying claim to; there's no suggestion that she wants to move to the USA and wear a flag themed bustier to fight crime, and if she just wants to establish her heritage as the daughter of Hippolyte then having a scrap with her sister is surely not the most efficient way of proving her claim in a society that continuously spouts off about scorning the violent ways of men.

And while I'm being picky, I have to wonder why it is that when Diana's (edited) memories are restored she doesn't return to the army, since this is the last thing she remembers doing, but instead takes on an entirely new cover identity (albeit using the same name). And why is she sent home in a submarine? 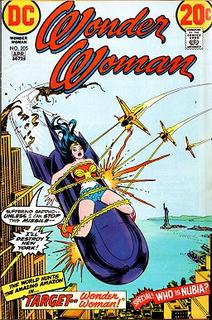 The next issue has the most wonderfully tacky cover with Wonder Woman tied to a giant phallic symbol. The story opens with the United Nations holding a beauty pageant (!) and Diana crying over how unfair it is that men don't notice her inner beauty because she wears glasses. [2] Then we move into the main action as masked thugs kidnap a diplomat and we meet possibly one of the stupidest villains of all time, Doctor Domino. This is a gang leader who wears a mask that looks like a domino piece. The diplomat has some information that Domino wants, so Domino threatens to kill Wonder Woman to get him to talk. His evil scheme is to tie Wonder Woman to a missile with a nuclear warhead and fire it at New York, so, oh yes, it will kill a lot of people in New York too.

Domino fires the missile, because he is just that evil. But of course Wonder Woman escapes and manoevers the missile back to Domino with a move that might work on a horse, but on a missile surely defies all the laws of physics. Afterwards Diana is all sad that the diplomat ignores her in her secret identity after he was all hot for her as Wonder Woman, entirely failing to spot what a shallow, sexist git he is.

In issue #206 we finally get the climax of the Nubia story, as she is revealed to be a pawn of Mars who has trained her all her life to fulfil his dreams of revenge against the amazons [3]. Unfortunately his training must have been particularly poor, as she loses all interest in the dark side the moment that the magic ring Mars has given her falls off. But then in the previous issue she is preaching the amazon credo of non-violence through superior force, so you are left wondering what effect Mars has ever had on her life. His influence appears to be that of a distant relative who shows up on your birthday to give you a teddy bear when you are aged sixteen.

With Mars' evil influence no longer affecting her, Nubia and Diana team up to belittle Mars personnel skills, and Diana returns home where Hippolyte finally gets around to explaining that Nubia is her sister. At which point this plotline comes crashing to a halt as apart from an odd guest spot in Supergirl #9 [4], Nubia is never seen or mentioned ever again.

In fact it seems that Kanigher's retcon comes apart before it has hardly started. After three issues of "New Original" Wonder Woman he gives us five issues of stories that are merely redrawn versions of old golden age comics with the scripts minimally altered to allow for continuity [5], although Steve Trevor pops up in #208 despite the fact that he's been dead for five years; otherwise the scripts are in many places identical to the originals.

A note in the letters column [6] claims that "Ric Estrada (pencils) and Vince Colletta (inks) will be recreating the style of the golden age Wonder Woman". This is in fact a lie. Although the scripts are complete steals from golden age stories, the art is a simplistic 1970's style that looks nothing like golden age Wonder Woman, and the picture composition is at times atrocious. Ric Estrada's bland, open pencils would be better suited to Barbie doll colouring books, so long as his art wouldn't be expected to tell a story.

It is at this point that Kanigher vanishes from our story not to be seen again for seven years. Julius Schwartz takes command as editor, and with Len Wein as writer they set out to deal with the various gaping plot holes left by Kanigher when took over.


Next: Part 3: Picking up the pieces

Notes
1. After their initial meeting the two girls appear only a couple of times, briefly. The apartment is only shown in a single panel. Neither girl is ever actually named.

2. She seems to have some odd insecurity problems.

3. Even though he's never mentioned her before.

4. where she is living on Paradise island as Hippolyte's daughter.

5. eg. The Holliday girls are replaced with generic amazons.

6. the header for which still shows Diana in her white feminist era outfit

Posted by Marionette at 4:53 am