Or, Nothing you ever really Cared to Know about Cir-El, and Couldn't be Bothered to Ask


Cir-El, AKA Supergirl 2.5 is first introduced in the final page of Superman: The 10 Cent Adventure. Unlike the similar Batman 10 Cent, this is not the kickstart for a big plot affecting all related titles, but a prologue to a story that takes a while to go anywhere. In fact Supergirl appears in 2 issues of Superman doing nothing of any importance before she finally meets him in Superman #192. 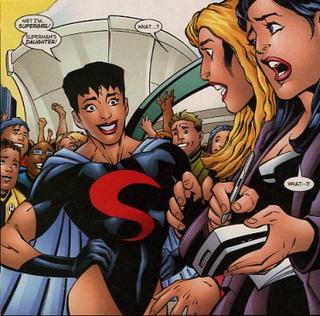 Cir-El's biggest problem from the outset was being written by Steven T. Seagle and drawn by Scott McDaniel. Her first major appearence in the 192-193 story exemplifies all the worst aspects:


1) She is supposed to be 15 years old but in fact looks like a bull dyke on steroids (as does everyone else including Lois Lane).

2) she wears the most horrible, drab Supergirl costume ever designed, and it doesn't even have a proper "S" symbol. It resembles nothing more than the sort of thing a Super-wannabe would pull together from their local thrift store and then paint a big "S" on the chest. Some reviewers have suggested that it follows the goth heroic style of things like Angel or The Matrix, but I never saw any of these characters in a black leotard and a cape, and anyway there is no attempt to give her any associated coolness that you find in typical goth heroes. It's just bad.

3) This first story is just so bad that it should win an award for horribleness. Much of the plot makes no sense, and Lois having a screaming fit at Superman for having an affair that produced this 15 year old girl is a gem of stupidity. Superman naively accepts her although not necessarily believing that she is really his daughter, despite the fact that she has been brought to Metropolis by his enemies, despite the fact that she won't explain any details to who she is and how she got there, other than the most absurd, vague statements.(1)

We then get several months of slow burn on the Futuresmiths plot in Superman, while the other main Super titles are busy having multi-part epics in which Earth is either destroyed or conquered, but these events don't even rate a mention in other Superman titles, let alone have any effect in any other DC comics. Cir El must have been on vacation that week because she doesn't appear in either.

The next time we see her she is being shown into Superman's fortress by the Futuresmiths in Superman #197. She stumbles around a bit, trips over a crystal that is apparently part of the phantom zone projector. Or something. It's not very clear. And then there's an explosion as something comes through, which causes her to knock herself out falling against a wall. In #198 we find that she is not related to Superman at all and is the offspring of 2 human parents (2). We also see her transform into her alter ego, who is apparently named Mia.

Her next appearance is in a story in Action #806 - 808 which, confusingly was published several months before Superman #197. Here she comes off much better in appearance and characterisation when being handled by someone other than Seagle and McDaniel. The out-of-costume scene before she gets involved in the action gives her more depth than all her previous appearances put together. And her costume almost looks good. But there are real continuity problems between Action and Superman. In this story Mia has a spiky punk hairstyle and clothes to match. When we next see her these have changed to generic T-shirt & pants and hair, and the highly visible tattoo she had done in Action is never seen again.

In the next issue box of Superman #198 we are promised that Supergirl's origin will be revealed in 199. In fact all we get is one page of Mia throwing a tantrum and Supergirl saying "Daddy" a lot even though she's known they aren't related since the previous issue.

Superman #200 finally does deliver a few answers, but in a bored infodump that lasts two whole panels, and unsurprisingly leaves many questions unanswered. Shortly afterwards she leaps into the time stream portal thing for reasons that I am rather unclear on. Brainiac tells Superman that this will erase her, but since he and Superman both survive the same experience, I fail to be convinced. It's not even very clear where Cir-El joins the party since she was left behind in #199 when Superman first enters the portal, and the big fight happens 100 years and one day into the future, or possibly thousands of years in the future. It's not very clear. She looks and behaves exactly the same as when last seen, but with all this mucking about with time travel, there is really no clue where this fits into her personal time line.

As far as I am aware this is the last to be seen of Cir-El (3), and nobody even seems to remember her by the next month. It's one of the weakest deaths in comics ever. It's only credible because nobody liked her very much and Jeph Loeb's version of Supergirl would appear only a couple of months later.

I've seen some reviews that suggest that Cir-El was initially intended to be a continuing character (4), and her origin was changed to distance her from Superman and set up her speedy removal when it became clear how unpopular she was. It depends how competent you believe Seagle is as a writer. The whole point of The 10 Cent Adventure is for the Futuresmiths (5) to obtain a Superman DNA sample. Then at the end of the story they awaken Cir-El. Although there is some guff about her being from the future, it is all the Futuresmiths telling her. At this point she does not even seem to recognise her own name. My reading of this at the time was that they had used the Superman DNA to clone her and all the "future Supergirl" stuff was just BS they were brainwashing her with.

In fact she is entirely vague about her background until her last couple of issues. And although she is aware of her alter ego, Mia, she doesn't seem to question why she should periodically

transform into a normal human girl from the present, or feel this important enough to even mention to "Daddy".

Ultimately the people responsible for her death were the people who created her. They made her ugly and boring and consequently she never really stood a chance.

1: Which is strikingly similar to Jeph Loeb's introduction of Supergirl 3 less than a year later. She is also immediately accepted by Superman with an unlikely and vague story about being related to him (6). Batman is understandably suspicious for the first issue, but in typical Loeb fashion seems to have forgotten this by the end of the story.

2: Contradicting Superman #195 where DNA test at STAR Labs proved she was Superman's daughter. Was this a continuity error? An indication in the change of editorial policy towards her? Or was this part of the plot all along and it was just written in such a hamfisted way that it looked stupid?

3: other than a guest spot in Superman-Batman #5, but that's Jeph Loeb for you.

4: Presumably to replace the cancelled/retired Supergirl 2. But having her appear so soon after the excellent Peter David version got the shaft annoyed anyone who liked that version.

6: Note also that nobody ever mentions the recently retired Linda Danvers Supergirl while Cir-El is around in the same way that nobody mentions either Linda OR Cir-El during the Supergirl sequence in Superman-Batman.

P.S. If I've missed any appearances of Cir-El or other information about her not listed here, please let me know where I can find them.
Posted by Marionette at 2:39 am

It's funny because they didn't need a Supergirl at the time. To quote the Dinastic Piece Model from Scipio, the Female Counterpart was being represented by Natasha, in her Mecha-Steel armor. Also, "What happened with the Natasha and the other supporting characters of the 'Steel family'?" They were quite nice at the time.