I was just over at http://www.superdickery.com/, which has some very funny stuff. If you haven't seen it before it shows images from old comics and adds amusing comments. A lot of this makes me giggle, but the main assumption seems to be that the creators of these comics were naively unaware of implicit double meanings in their works.

In some cases it is only the perspective of time that gives covers a humourous side (like the war propoganda ones), in others it is the lack of context that makes them funny, but there are some covers where I'm pretty sure that the joke was there all along, and it is only by assuming that previous generations were less sophisticated or worldly that you can poke fun at them for not seeing the joke. 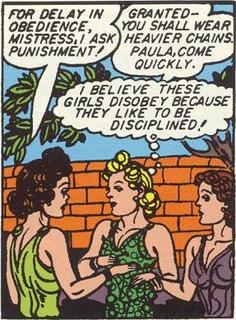 Obviously Wonder Woman gets a lot of stick (oops, bad metaphor) for the sexual symbolism and bondage on display through the years, but to suggest that the creators of the comic were ignorant of this assumes extreme stupidity on their part. After all, Wonder Woman's creater and first writer William Moulton was a psychologist so he would have had to be a pretty bad one not to spot all the bondage going on in his writing. Take the panel reproduced here from Wonder Woman #4 - does this image suggest an ignorance of the bondage connotations, or is the thought bubble a knowing wink to the adult reader?

Similarly I read in an interview recently (I can't remember where) an editor at DC explaining that they did a survey in the 1960's and there were several things that sold extra copies of a comic when depicted on covers. The main one mentioned was apes. Apparently apes made for very popular cover images and sold a lot of extra comics, so that's why there are a lot of gorrillas, monkeys, and chimpanzees in the comic world (there's even a separate ape section at Superdickery.com).

I don't think it's actually stated that images of cute girls tied up also sold extra copies, but it's hardly a stretch of the imagination; back issue listings would hardly specify [bondage cover] if it wasn't expected to make a difference. It's not like I've ever seen a listing that says [monkey cover].
Posted by Marionette at 5:33 am

I've read that Moulton(/Marston) used bondage in WW to prepare male readers to joyfully submit to matriarchal rule. His Wikipedia entry has a couple great quotes near the bottom of the main entry.

The bondage covers might not have sold any better on newsstands, but I wouldn't be surprised if there are enough people who now collect bondage covers that they just started getting listed like that for convenience. Amused, maybe, but not surprised.

(I found your blog from your comment on Suspension of Disbelief, BTW.)