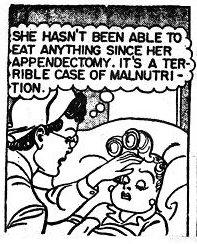 I've always felt that Etta Candy was poorly treated by writers of Wonder Woman. She was always the pretty girl's fat friend; usually little more than a caricature obsessively stuffing her face with chocolates regardless of the situation, but now I find that not only is there much more to this, but it is all apparently Wonder Woman's fault!

In the Wonder Woman newspaper strip Diana meets Etta for the first time as a patient in the hospital where she works as a nurse. Etta is wasting away, having been unable to eat since an appendectomy. For some reason Diana feels that stuffing her with 10 pounds of chocolates is the answer to her troubles. 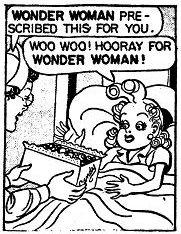 Etta obviously takes it to heart when Diana tells her that Wonder Woman says the chocolates are good for her, and thus she starts on a lifelong obsession.

And yet within hours she has ballooned up in what is clearly some kind of allergic reaction, and thus begins a struggle with addiction that lasts for the rest of her life. 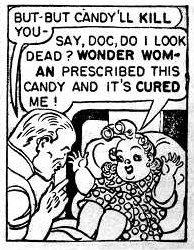 Excellent blog, Marionette, I can see that I now have a go-to site on Wonder Woman! Love your writing, love your topics; I've got a fair amount of reading to do here.

Pat aka Brain Death from abpc.

I've devoted posts to her glory.

She, not Wonder Woman, was the true icon of female empowerment.

Etta could care less about "getting a man", while Diana was always mooning over Steve.

Great work Mari!
My first time reading your blog and I must say you've got a great natural style to your writing.
I'll be reading more for sure.