As a special favour to Scipio I present Lois Lane's roommate Marsha Mallow!

As part of the big DC shakeup of the early 70's Lois Lane quits her job at the Daily Planet and goes freelance. This reduces her income and gives her an excuse to bring in three other girls to share her apartment. These are Julie Spence (who had been a supporting character for a while), Kristen Cuttler, and Marsha Mallow. 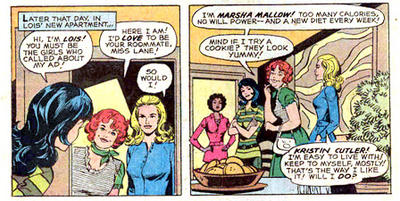 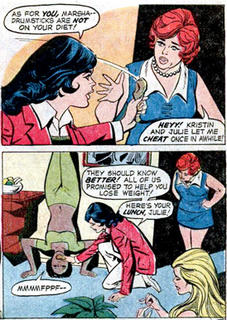 From the outset Marsha is portrayed as struggling with her weight. Her big problem is that she enjoys food too much. For several issues subsequent to the new characters' introduction they appear for a grand total of one page per issue in a brief domestic scene entirely unrelated to the main story. Marsha is usually eating or encouraging others to eat. Her other main interest appears to be dyeing her hair.

Despite struggling with her food obsession, Marsha does appear to grow slimmer over time, so her diet must be working. None of Lois's roommates ever seem to be interested in getting boyfriends, though. Even the thin ones. Either they are intimidated by the nearness of the masculine ideal of Superman, or maybe they are gay. 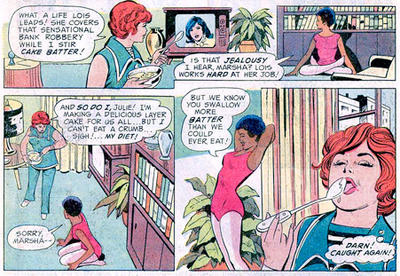 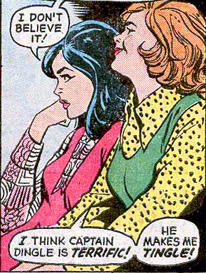 Eventually Marsha and the Kristen do get to participate in the main story, being hypnotised by clowns and going on dangerous hikes in the country. But then what else would they expect when hanging out with Lois Lane, a woman who can't stand near a window without falling out of it.

Oversharing there, Marsha
And that's about it. The last we see of Marsha and Kristen is in Lois Lane #130, with Marsha in typical form suggesting Lois get over her nightmares with some comfort eating. But she's looking quite good herself, now. 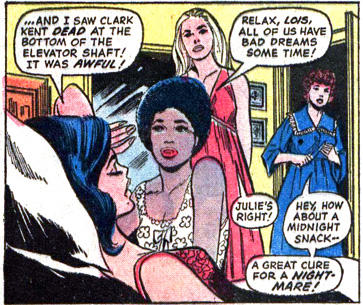 After that the roommates are referred to off camera, but the only scene that takes place in the apartment shows Lois alone. And then the comic is cancelled after #137 with Lois moving to Superman Family. Does Marsha go too? Her absence from the last 7 issues of Lois Lane suggests not.

EDIT: One thing that occurs to me on reflection is that Marsha doesn't really seem to mind being fat. She is under a certain amount of pressure to lose weight, and agrees that it's a good idea in principle, but she doesn't stress about it, and the reason I think she finds it so hard to stop nibbling is that deep down she doesn't really care. Of course she blatantly uses food as a crutch to alleviate problems, but I don't see that's worse than widely used alternatives such as drink, drugs, or obsessive blogging...
Posted by Marionette at 8:39 am

Is it just me or does "We know you swallow more batter than we could ever eat" sound extremely dirty?

I just realized: Scipio stole this post from you, TOO!!! In fact, he copied it nearly verbatim!!!