Fantomah is one of the most obscure characters in the history of comics despite the fact that she has a good claim to being the first ever comic super heroine. Two years before Wonder Woman got her star spangled pants on Fantomah made her first appearance in Jungle Comics #2.

In 1940 Fiction House were doing great business in Tarzan knockoffs. and particularly popular was a female variation so successful that it spawned a whole sub-genre of "White goddess of the jungle" characters with names like Sheena, Shanna, Rima, Rhulah, Jann, Sarri, Tanee, Tanda, Tangi, Tegra, Zegra, Vooda, Leopard Girl, Tiger Girl, and Jungle Lil; invariably a hot caucasian babe in an animal skin bikini who acted as a kind of exotic gamekeeper. 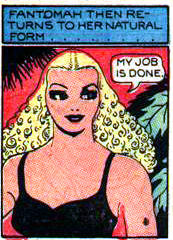 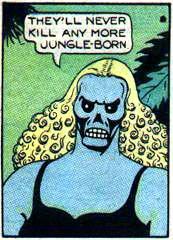 Among all these characters Fantomah stood out, and not just because she had a three syllable name. Her costume was one of the duller, more generic variants, often just a plain short black dress, or a one piece that didn't even have a leopard print, but she could fly and she could do this weird skull effect with her face that looks all the more scary for being framed by her curly blonde hair. She had other powers too, but these were often story specific and never seen again. They are never explained, but the examples I've seen are consistant with some kind of illusion power or hypnosis as they usually involve making people see things like ghostly elephants or impenetratable vegetation.

Despite the name being an obvious feminization of "Phantom"(1), the male character she most closely resembled was The Spectre, at least in her early days. She doesn't so much protect her jungle home as bring down retribution on those that defile it. She might warn off the evil invader with his giant spiders but she then stands back and allows him to devastate several villages and a small city before carrying him off to his doom. 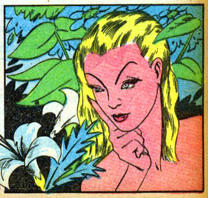 The strip went through several changes of style, and later artists seemed to drop the whole skull transformation thing (2) as she becomes less of a force of nature and more human, even adopting a pet panther. This makes her more sympathetic but reduces the aspects that make her unique. And then in Jungle Comics #27 she received what may be comics first ever retcon as they apparently(3) gave her a whole new origin. No longer was she "Mystery woman of the Jungle", now she was "Daughter of the Pharaohs", acquiring a whole new egyptian schtick. She continued to appear regularly in Jungle comics until issue #51 (4) and thereafter was never seen again (5). In all this time she never got a cover feature, and often wasn't even listed. She was obscure in her own time, but she far outlasted the majority of golden age heroines, and that has to be worth something.

Of the few Fantomah stories I've been able to find, I think the early "skullhead" period has a strange visual charm mixed with grotesquerie that give it a power beyond the relatively formulaic and banal writing. But I particularly like the next period, which I tend to think of as the "Namora" era because of the Sub-Mariner style eyebrows Fantomah develops at this point. The art is technically still no great shakes, but there is a playfulness to the page layout the reminds me of Ken Bald's work on Sun Girl. In one story that features a big snake, the creature's tail end often seems to fall out of the panel and even loop itself around the margins. 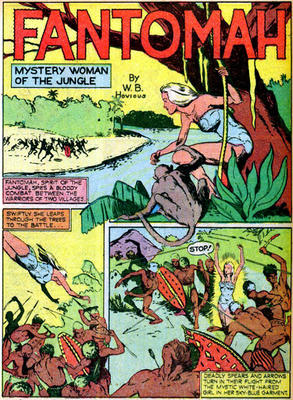 There's a similar incorporation of the page layout into the illustrative design in the title page above, from Jungle Comics #18. It has an interesting flow from one panel to the next that makes a lovely storytelling device. Your eye is immediately caught by the title, and then drawn down the line of the vine that Fantomah is holding. The line is then taken up by the monkey's tail, continuing in the curve of the big leaf that leads directly into the second panel. Fantomah herself provides a dynamic arrow into that panel, and the tribesmen running away break out of the right edge of the panel and lead the eye into the third panel. This is quality comics storytelling at a time when many features were still treating the medium as little more than text illustrated with a series of static and discrete images set in an unbreakable grid. I really like this art and I have no idea who drew it. 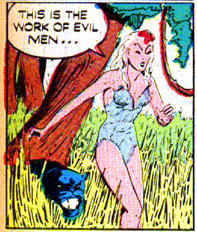 Does this make her a superhero? Depends how you define a superhero, really. Personally I think there has to be a spandex element to really qualify, and Fantomah's dress sense was not her greatest asset. But she remains one of the most original of the jungle girls.

Notes
Information available about Fantomah is sketchy at best, and much that can be found on the web seems to be partial or innaccurate. I've done my best to verify my facts by at least two sources (ones that aren't obvious copies of each other) but without getting my hands on more of the actual comics it's hard to be sure.

1. The Phantom had been doing the Tarzan thing in Newspaper strips since 1935 rather overdressed for such humid landscapes in a bright purple costume that can really only be described as anti-camouflage
2. Good Girl Art doesn't quite work when you have a skull for a face
3. Unconfirmed. I only have one source for this, but it fits with references I've seen elsewhere that confabulate the different versions of the character without realising that she changed over time.
4. or #52, depending on who you talk to
5. The Grand Comic Database claims she later appeared as a backup in several issues of Ka'a'nga, but I've read one of the comics they list and the strip attributed to Fantomah is in fact Camilla (another Jungle Comics feature) under the somewhat vague title of "Jungle Girl".

Posted by Marionette at 3:56 am

i just discovered Fantomah a while back. Crazy weird stuff man. Thanks for the history.

In Les Daniels' History of Wonder Woman, there is a super-heroine called Olga (super-strength and x-ray vision) who appeared in Spicy Mystery Stories in 1938. So she not only predates Fantomah, but all the super-heroes as well.

Anyway, it looks like Wonder Woman isn't strictly speaking the first super-heroine; she's just the first to make her mark.

Fantomah rocks. Although she's a product of the time and has a very colonial bent, there's something very compelling about someone who turns into a blue-skinned, skull-faced avenger and protects nature.