Who's that Girl? Part 5: Strange Changes

Jack C. Harris was the writer elected to bring Wonder Woman back to the present day. Although the main plot of the first couple of issues is a clumsy 2 dimensional James Bond by numbers snorefest of kidnapping and pursuit, he uses this to remind the reader of the state of play back in issue #228, before we got sidetracked into World War 2. He also starts to lay the groundwork of new suplots involving an army investigation into Steve Howard and his connection to the "dead" Steve Trevor. Then there's a brief change of pace as we get that old standby of the evil witch in the apartment next door(1).

Then it's back to secret organisations as we find that Washington is honeycombed with tunnels forming a secret base that would put your average Bond villain to shame, complete with secret entrances straight out of the Man from U.N.C.L.E. (or maybe Get Smart). Steve (Trevor) Howard is taken here by agents of Army Intelligence and he is questioned for many hours before they get around to checking his fingerprints and washing the dye out of his hair. But then the head of the investigation is a loony who has found some huge dead monster in a cave at the bottom of the secret base that apparently went unnoticed when they built it. He hooks Steve up to the monster with some Frankenstein surplus fiendish machines and struts about wearing a hooded scarlet cloak and sunglasses(2).

Wonder Woman inevitably breaks in to the secret base, whose defences are as poor as you might expect when the commander is given to worshiping dead monsters while wearing sunglasses in a cave, but after more of a workout with the monster, reanimated using Steve's life force, it's time for Steve to drop dead once again.

Over in Adventure Comics #460 we find that Wonder Woman's lasso has yet another magic power to its credit, as she uses it to open a portal to the Underworld in order to go looking for Steve Trevor's soul. Apparently her religious convictions are at a low point here as she defies Aphrodite to do so, and immediately picks a fight with Pluto once she arrives. But it's all a waste of time, since Hera has arranged for Steve's soul to be "placed among the stars" (3).

But life goes on, and shaking off Hawkwoman's attempts to console her and the attempts of Steve Trevor's "brother"(4) to kill her, she gets a job at NASA. They must have been so impressed with her resume as nurse, military intelligence agent, boutique owner, interpretor, and movie liason, that she seemed a natural for the space program.

In fact it becomes clear that the entire sequence since the storyline returned to the present day has all been designed to ease us into yet another change of direction, and although it hasn't been particularly well written, at least it's not as absurdly abrupt as #204. 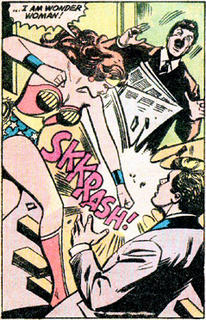 To celebrate Wonder Woman's 250th issue we get a dramatic twist as another amazon, Orana (5) challenges Diana's claim to the title of Wonder Woman under an ancient law that nobody has ever mentioned before. Though how ancient can a law be that is designed to cover the specific issue of who gets to be Wonder Woman, since the position was only created quite recently?(6)

So once again the amazons compete in a great tournament to decide who will become Wonder Woman, only this time the contest is a mad, over the top event that requires them to hold their breath underwater for an hour at a time, float in the air for 12 hours, and as the climax, get flown into space (7) to race by jumping meteors that are falling to Earth. Queen Hippolyte declares Diana the winner because she takes the trouble to prevent the disloged meteors from doing any damage (8) but the host of olympian gods pop up for the first time en masse to interfere and say that Orana is the winner, regardless of the fact that her behaviour throughout the contest has demonstrated that she is entirely unfit for the role. (9)

Orana, of course, is totally hopeless as Wonder Woman. She has spent far too much time training to win the contest and none at all on considering what will happen if she does. Her ignorance of America is so profound that you have to assume that the only way she found the place at all was by setting the invisible robot plane to autopilot. Diana inevitably sneaks out after her, breaking some other ancient law they just made up about only one amazon being allowed out at a time, steals a rocket and flies home just in time to meet up with the man from NASA who has come to see her about being an astronaut. (10) The dumb plot with one of the stupedest two dimensional villains you are ever likely to see plays out, climaxing in an aerial shootout as the idiotic villain tries to prevent Wonder Woman from stopping his neutron bomb missile from detonating.

How stupid is this? Let me count the ways: 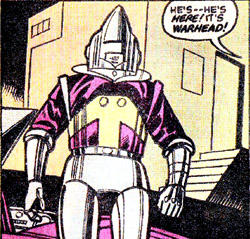 1) It's a neutron bomb. Since the fight is taking place above the target it can't be that far from ground zero. The villain, Warhead (11) is supposed to be an international arms dealer, and yet he is too stupid to realise that sitting over a nuclear explosion is a bad idea.
2) The bomb is dropping from orbit. It has to be traveling at least as fast as 320 kph/200mph (12) and yet Diana not only spots it as it drops out of the sky towards her, but manages to maneouver her plane underneath it so that she can catch it. 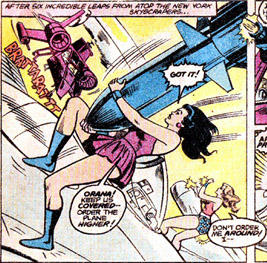 3) Diana might be strong enough to catch the bomb but she is standing on the wing of an aircraft at the time. Even if the robot plane is so absurdly strong that she wasn't driven through the wing, the impact should have rolled it over.
4) Diana then throws the bomb at the bad guys and it explodes, causing about as much damage as a hand grenade, rather than a nuclear weapon (13).

You are left with the feeling that the writer does not really have much of a clue what a neutron bomb was, and he was just using a popular buzzword of the time. But then his grasp of aerodynamics and basic physics is considerably lacking too.

As for Orana, it turns out that she hasn't put enough practice into the game of bracelets and bullets and dies semi-heroically (14) And since no one else feels the need to get shot at on a daily basis, Diana gets to be Wonder woman again (15).

And there we leave the amazon princess once again. I had expected to get a bit further in this installment, but all that inanity took up more space than I expected, and it's looking like things are going to get complicated from next issue so it seems like a good point to pause.

Next: Fly me to the Moon

Notes
1. Not for the first or last time.
2. Your tax dollars at work.
3. whatever that means
4. I don't believe he is really Steve Trevor's brother, since he has never been mentioned before or since. I reckon he's just some nut job who thinks he is Steve's brother.
5. Why is it always the red heads?
6. it's hard to be specific time-wise with anything to do with a superhero's origin as it is constantly revised to be 3 - 5 years ago
7. the amazons have an advanced space program, obviously
8. Orana is so careless
9. It's an interesting method of choosing your ambassador that I'd like to see more nations employ, but as soon becomes evident very quickly, it's not the most practical.
10. why she would even want to become an astronaut escapes me, since her invisible plane is capable of reaching orbit without all that faffing about with booster rockets.
11. he's got like a missle for a head. I am not making this up. Look at the picture.
12. terminal velocity
13. Doesn't she have some sort of code against killing?
14. she's snipping at Diana and refusing to take advice that would have saved her life, but she is, after all, fighting the bad guys.
15. the whole rocket stealing and leaving without permission things presumably having been swept under the carpet. But that's what you get when your mother is queen
Posted by Marionette at 11:51 pm

The villain, Warhead is supposed to be an international arms dealer, and yet he is too stupid to realise that sitting over a nuclear explosion is a bad idea.

Also, someone forogt to tell him that he looks like a complete and utter dork. And why does he stand like that? Is the costume stiff and ungainly as well as stupidly ugly?