Who's that Girl? Part 6: Plus ca change 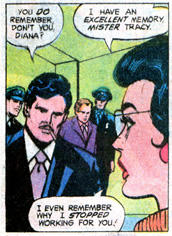 Wonder Woman's flirtation with the space program is not long lived. Perhaps she realises how dull the whole thing had become by 1979 (1), particularly when her own plane is many decades more advanced than anything NASA has to offer, or perhaps it is just that incoming writer Paul Levitz can't think of anything to say on the subject. In #255 he even sends her back to the UN as a delegate for a conferance, but this could easily be a story set ten issues earlier with a couple of speach balloons altered to get in a NASA reference, and a short scene where Diana is offered a job. And then next issue we get a couple of thought balloons about how boring the area around the base is compared to New York (2) and by the end of the issue she has resigned. 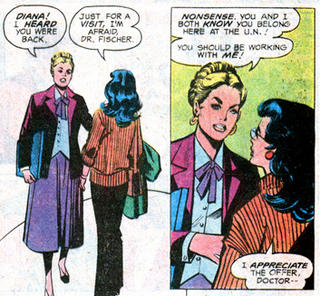 Back in New York the only person at all ruffled by Diana Prince going back to work for the UN is her old boss (3) but he is ignored. And then in typical Wonder Woman fashion having reversed the plot set up by the previous writer Levitz vanishes to be replaced by Paul Kupperberg who stays long enough to write the first two parts of a three part story about Mars seizing power in Olympus and deciding to consolidate his power by lording it over New York, with Gerry Conway returning to do the final part of the story.

The whole business of Mars taking control of Olympus is poorly written. Zeus is off on a business trip at the far end of the universe so Mars appears to have just declared himself ruler. The few other gods we meet appear to just be indulging him, and although Aphrodite is pissed at him there is no sign of any real power struggle going on.

Mars then brings in an image consultant to help sell him to the americans, but rather than suggesting he get an outfit that doesn't look so stupid (4) the guy suggests making Wonder Woman appear a menace and then saving the city from her.

Mars achieves this with one of the stupidest bits of WW lore (5); the idea that if her bracelets are removed she will go berserk. And so he sends Hermes to snatch the bracelets and Wonder Woman duly goes on a rampage. So far so good, except that once she has been captured she manages to control this uncontrolable rage sufficiently to cunningly escape, and thereafter shows no signs of berserkness other than a few thought balloons whining about how hard it is to keep her temper. Why she couldn't control it the first time around is not explained, and neither is how she manages quite adequately without them when she is in her secret identity. 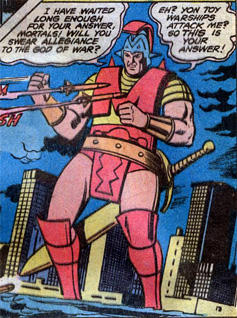 Meanwhile Aphrodite sneaks around a lot in a cloak, complicates the whole thing unnecessarily as a test for Wonder Woman (6), and eventually sends her off to the end of the universe to pick up a gong for her. Why she doesn't do this herself is never explained. She clearly could do it as she replaces it afterwards, and it can hardly be the usual BS about gods not acting directly since the problem they have to deal with is Mars stomping around New York in gigantic

form (7). A shame every other superhero in the universe had that day off, but isn't that always the way?

Wonder Woman gets back with the gong, bangs it three times and everything is made better again. A cliche lazy ending to a poorly written story which should have been an epic event.

And then finally, after 7 issues Diana goes for an interview for the job she was offered back in #255 (8), and she is confronted by Farley from UN security, who has been checking up on her background(9).

Conway then sets to develop threads from past issues into an evil organisation (10) of the James Bond sort, with some ambitious plan that 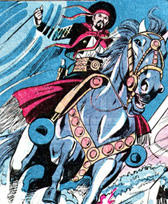 seems to involve attempting to assassinate people wherever Wonder Woman happens to be using all the stealth of cliche stereotype caricature villains like the african Bushmaster (11) and the festively dressed South American El Gaucho (12). Have these guys never considered subtlety to be an asset in assassination?

After this we get a brief diversion into an "untold story" of when Diana Prince was at NASA. This must surely be a story from an alternate universe as it shows Diana flying a space shuttle into orbit on a test flight despite the fact that she never completed her training (13), and never went into space as Diana Prince during the NASA issues (14). 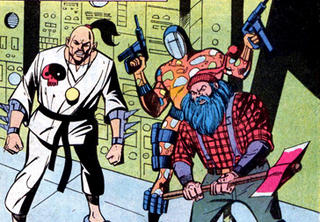 Then with assistance form Animal Man it's back to the big finale with the Prime Planner's Cartel in which we get to meet his final three "perfect assassins" - a lumberjack, a mongol martial artist, and a guy in a colourfully spotty costume who we are told is a master of disguise.

It's James Bond with silly costumes and when the evil leader is finally revealed I was surprised, but somehow didn't care. And the speech he gives that ties in a lot of random storylines over the past 20 issues or so is just nonsense.

And I see that the next issue heralds "a bold new direction" (15) in the life of Wonder Woman, so it seems like a good place to finish this entry.

Notes:
1. inbetween training and fighting the Royal Flush gang it's a surprise that she has the time to be bored.
2. somewhere between the end of the Moon flights (Apollo 17 in 1972) and the start of the Space Shuttle (Columbia's first orbital test flight was 1981)
3. unsurprisingly since she was very mean to him when she resigned.
4. if you are a god do you really need to go around with a big M on your chest?
5. this sad device was last used by Martin Pasko for exactly the same purpose in #229
6. Another clue that the gods aren't taking Mars' bid for power very seriously.
7. Actually, now I think about it this part of the story bears an uncanny resemblence to the first Galactus story in Fantastic Four, where The Watcher sends Johnny Storm off to some far off bit of the universe to pick up a plot device that causes Galactus to go away. Subtle in joke or cheap steal? You decide.
8. Bear in mind that she spent less time than this in the space program.
9. Last seen in #256, having just missed her.
10. The mysterious Master Planner and his Cartel. Even the names used are boringly generic.
11. he's black, dresses in animal skins, and uses traditional african weapons that have high tech devices built into them for that little extra oomph.
12. dressed for a parade, uses bolas and lasso, tweaked of course, and rides a flying horse.
13. And in what situation would a trainee ever be used as a test pilot? It's like putting the tea boy in the driving seat of a formula 1 racer when you want to try out the new brake system.
14. all four of them.
15. where have I heard that before? When was the last time that Wonder Woman managed to hold the same direction for more than a dozen issues? This comic has as many new directions as a wobbly supermarket trolley.
Posted by Marionette at 10:07 am

I REALLY need to know the names of those 3 deadly assassins.