The odd thing is that when there's no superheroes around, somehow the world manages without them. One of the standard plots of recent years is the one where the superhero is completely erased from history and they have to find some way to set things right. And yet somehow all the universe shattering disasters they have averted do not seem to have come to pass without them.

The Earth hasn't been taken over by one of the crowds of meglomaniac super villains bent on world domination, or been invaded by any of the hundreds of alien races that are forever dropping by. It hasn't been eaten by Galactus or used as a staging post in any of the multitudinous galactic wars that seem to be going on, and neither have legions of the undead run riot. In fact it seems that generally the world manages quite well when they are unavailable, just as it did for all the centuries before they appeared.

It seems that there are only two possible conclusions. Either the super heroes in some way encourage conflict, or they are just accident prone. It's true that often a fairly normal person will develop meglamaniac or nihilistic tendencies (along with the necessary abilities to make them a threat) as a response to super hero activity. It's possible to read several years worth of some titles (particularly those titles that include the letter X) without anything occuring that is not in some way a response to the characters' earlier activities, but even so, I personally lean towards the accident-prone theory.

As an example take Wonder Woman v1 #167. A story that lasts a mere 11 pages opens with Wonder Woman and Steve Trevor having a quiet chat on a deserted beach. Within a couple of panels a passing airliner starts to crash. 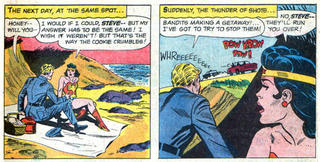 The following day at the same "deserted" spot a high speed police chase occurs, and no sooner than the escaping gangsters have been rounded up an enemy submarine surfaces to offload some

saboteurs. Steve and Wondy drive into town only to have a girder from a construction site fall on them, a lion escape from a circus, and bank robbers come charging out of the building in front of which they have just parked. 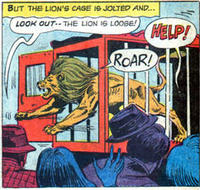 Stuff like that just doesn't happen to ordinary people. Well, not all on the same day, anyhow. And if it did. it would qualify as being the most exciting day of their life. For a superhero it's barely worth a mention in their diary because every day is like that. 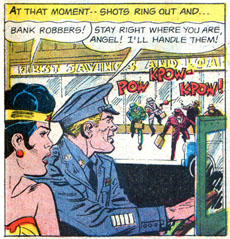 No wonder most heroes are crazy. They never get a moment's peace!

spitzig said...
This comment has been removed by a blog administrator.
5:20 am

Don't know if you've seen Batman Begins, but Ra al's Guul(sp?) blames Batman. Basically, bad guys with masks are showing up because they have to trump the good guys with masks. I'm guessing there is a similar philosophy for street gangs and cops.

Removed a bit, because I guess the idea sounds ok.