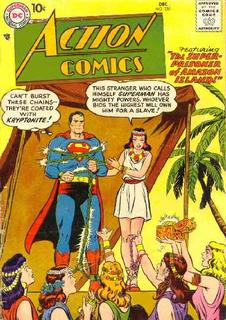 In 1942 Wonder Woman arrived in the U.S.A. from Paradise Island as the representative of the Amazon nation to help with America's war effort. Fifteen years later Action Comics #235 featured a story in which Lois Lane is shipwrecked on a desert island and meets another, lost tribe of Amazons.


It's probably just as well she hadn't arrived at the original Amazon homeland. 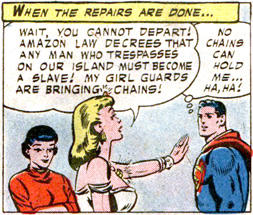 Superman blunders in as usual to bail Lois out of trouble but in doing so breaks local laws that forbid any man to set foot on the island. Luckily the consequenses seem rather less dire than if he had made the same mistake on Paradise Island, but Amazon queen Elsha declares that by their law he must be sold as a slave. Superman smugly goes along with this for a laugh, and with no real respect for another culture, believing that no chains can hold him, but he has quite forgotten that this is a period where kryptonite can turn up anywhere, and guess what his chains are made of?

And yet the kryptonite fails to affect Supes, so he allows events to unfold while he tries to work out what is preventing the kryptonite from hurting him. The Amazon queen holds a ceremonial auction to sell the super-slave. It is clearly ceremonial

since she gets to be auctioneer and also to bid, using funds from the royal treasury, which one assumes would also be the beneficiary of any profits from the sale, so she is basically selling to herself. But Lois fails to understand the ceremonial nature of the event and attempts to destablize the local economy by introducing vast quantities of american money into the country in order to influence the situation.

In an attempt to stave off this foreign imperialism Elsha ends centuries of tradition by declaring emancipation. But there still remains an ancient law relating to male trespass that the queen desperately attempts to enforce, which decrees that the offender will be married to the first woman who can give him a task he cannot perform. 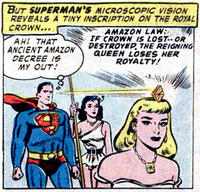 After graciously allowing Lois and her friends to set tasks Elsha once again shows the entirely ceremonial nature of these laws that Superman and Lois have so completely failed to grasp, setting him the task of making her a commoner. The solution to this task is in plain view, but rather than responding with the symbolic gesture that is clearly called for here, Superman acts entirely selfishly and 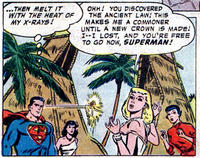 completely destroys her royal emblem of authority, rather than symbolically "losing" it as is all that is required. Thus the culture is destablised further as the legal authority is removed from power due to Superman's blundering self-centred attitude.

And yet his own hubris defeats him, for once Supes has destroyed the crown it becomes apparent that it was this that was counteracting the effects of the kryptonite, and he is so

pissed that he immediately leaves the civilisation he has wrecked, never thinking to ask if there was any more where that came from.

And that's the last we hear of the alternative Amazons. Superman never bothers to mention to his fellow Justice League member that he's found a lost offshoot of her race reduced to its last few members, struggling to preserve their ancient ways on a nearby island. But then he's probably just embarrassed about the damage he has done to another culture in pursuit of personal interests.
Posted by Marionette at 9:39 am

Yeah, but they're slaveowners. Why should Superman respect their culture? Fuck 'em.

Also, "Elisha" is not an Amazonian name, it's an anglicized hebrew name. This woman is clearly a fraud.

So they want a man as a slave, but if they can't get get him as a slave, they'll settle for having him as a husband.

I know the old Superman comics consistently portrayed marriage as something Lois wants to trap Superman in, but this may be the closest they came to calling marriage a form of man-slavery.