The Other Amazons 2: Marvel's Hippolyta 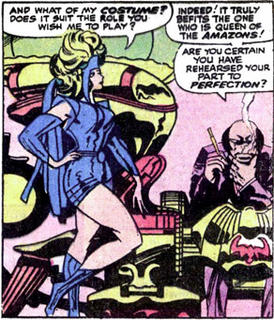 DC and Marvel have both looted the world's myths and legends for characters and ideas, and even though early on Marvel staked a claim on the Norse pantheon with Thor and DC got the greco-roman gods with Wonder Woman they weren't averse to poaching on each other's territory and doing their own interpretations. I believe Thor actually appeared in a DC comic before Marvel even existed. He certainly showed up more than once after Marvel made such a success of him, though usually in a much more traditional form with a big red beard to avoid copyright issues. 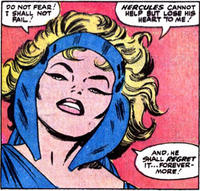 One mythical character who achieved a long history with both publishers was Hercules. He features in Wonder Woman's origin as both villain and benefactor. Despite having enslaved the Amazons and being the root cause of their seclusion from the rest of the world, he becomes one of the patron gods that show up at Diana's birth to do the good fairy bit and ply her with gifts. He also appears elsewhere in DC as a hero, even gaining his own title briefly. Over at Marvel Hercules is often portrayed as Thor's opposite number on the rival greek team. They occasionally fight and often team up. Hercules also had a title of his own at Marvel once or twice.

But at one point in Thor Hercules becomes a regular member of the cast, and it is in Thor #127 that Pluto plots against him and is assisted by Queen Hyppolita (sic) of the Amazons. 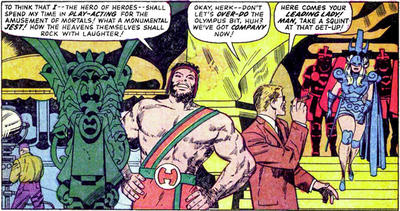 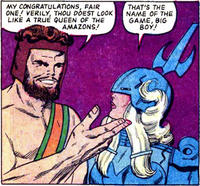 It's an interesting sidelight on propoganda that your point of view changes how you tell a story. Since Hercules is the hero in the days when superhero stories were less morally ambiguous, his backstory with Hippolita is at some variance with the DC version and the myth cycle on which it is based, and Hippo is here cast as the spurned lover out to get revenge for his rejection of her advances, rather than the victim of his attack. 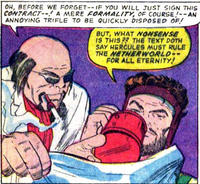 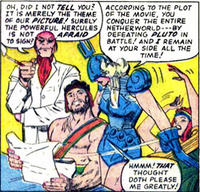 And so Hippo plays the femme fatale with Hercules, tricking 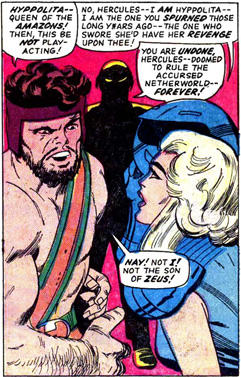 him into signing a contract with Pluto while masquerading as a movie star in a film production calculated to appeal to Hercules' vanity, since it is a movie where he gets to play himself. But once the contract is signed and the deception revealed, Pluto and Hippo vanish off to Olympus. But sadly Pluto arrives alone and Hippo is never seen again. It's a shame because Jack Kirby was having a lot of fun with her, and she didn't get up to anything nearly as interesting at DC (other than a little light brainwashing) since the Wonder Family were retired.
Posted by Marionette at 8:50 pm

Hey where did you get 'Vitruvian Woman'? I've seen a few variations of it around featuring different characters.

The original version was part of a montage of Wonder Woman related images. I asked the creator if I could use it and he sent me a copy but it didn't work in the form I needed it, so I recreated the picture from the same source materials.

It's a combination of DaVinci's Vitruvian Man, Harry Peters' original preproduction sketches for Wonder Woman, and a visit to the Little Shop of Photos.

It just seemed to sum up a lot of what this blog is about in one simple image.